This is another entry I have wanted to do for a while but have been too busy to post it, so I apologize for the late post. Anyway, I was visiting my cousin Connor for a couple of days before the game. We planned that we would go to a game while I was visiting him. We got to the stadium with about 10 minutes before the gates opened. Right away, we headed over to behind the outfield fence where many home run balls from bp land. Within 5 minutes of looking I found ball #1 nestled in the grass behind the centerfield outfield fence. After searching the area making sure I had not missed any balls I headed over to the Nat’s bullpen. As I was looking around the bullpen I found ball #2 on the side of road with no cover. I assume this ball was a home run that none of the Blue Rock’s staff retrieved. After putting ball #2 in my bag, I started to head over to the main gate to get inside the stadium however, on my way a grounds crew member asked if I would like a ball. I said, “Yes please!” He tossed it up and I managed to box out my cousin for #3 on the day.

After I headed into the stadium I got some autographs including some really good players such as, Hunter Dozier, Michael Antonio, and Bubba Starling. After getting settled into my seat I took some pictures of the field.

At around the 7th inning I got up from my seat on the 1st base side and I headed over to the third base side to see if there was any fouls that had not be retrieved outside the stadium. As I peered out I noticed a white baseball in the grass. I ran outside the stadium and retrieved it for ball #4. At around the 8th inning my cousin and I decided to go outside the stadium again and watch the Nat’s bullpen. As one of the relief pitchers was warming up he overthrew a pitch and it bounced underneath the bullen fence. I quickly grabbed for it and successfully had it in my possession for ball #5. As I was about put the ball in my bag I realized the pitcher was still warming up so I took the ball and rolled it back underneath the fence for the pitcher to continue to warming up. The catcher thanked me as he threw the ball back to his pitcher. When it was the bottom of the 9th Connor and I headed back into the stadium and positioned ourselves to get the lineup cards from both teams. I went for the Rock’s dugout while Connor went for the Nat’s dugout. After Daniel Rockett popped out to the catcher to end the game I ran down the steps toward the corner of the dugout seats in order to ask for the lineup card. However, the manager gave it to someone else so I was unsuccessful. Likewise Connor did not get the lineup card for the Nationals. However, after Daniel Rockett popped up he walked slowly into the dugout and proceeded to break his bat in anger on the dugout steps. He then angrily threw it into the dugout. Seeing the bat in the trashcan I ran over to the other side of the dugout where the bat was located and asked the bat boy for the bat. He said, “Sorry, I am not allowed to give it away.” There was an usher a few feet away and I asked him for the bat however, he had the same response as the batboy. Discouraged, I mentioned to Connor that there was a broken bat that nobody was allowed to give away. Quickly, Connor ran over to the trashcan and proceeded to ask the same usher again. This time the usher said yes and handed Connor the bat. In the parking lot Connor proceeded to give me the back which was very kind of him to do. Overall it was a great day and a awesome exciting game. Go Blue Rocks! 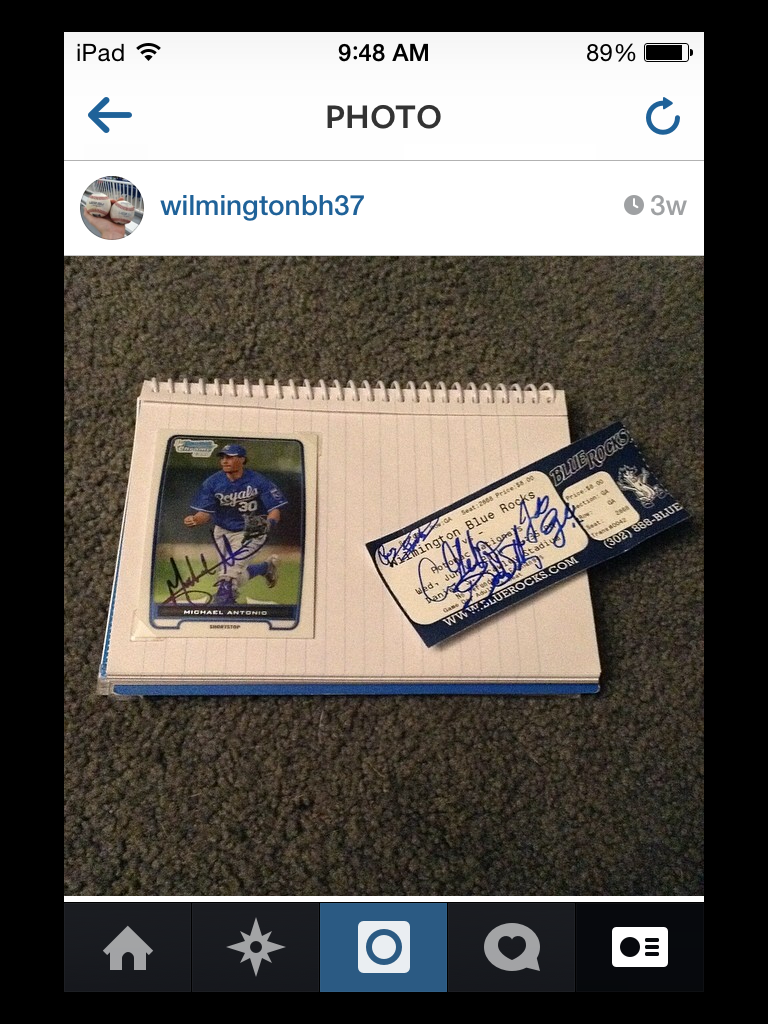 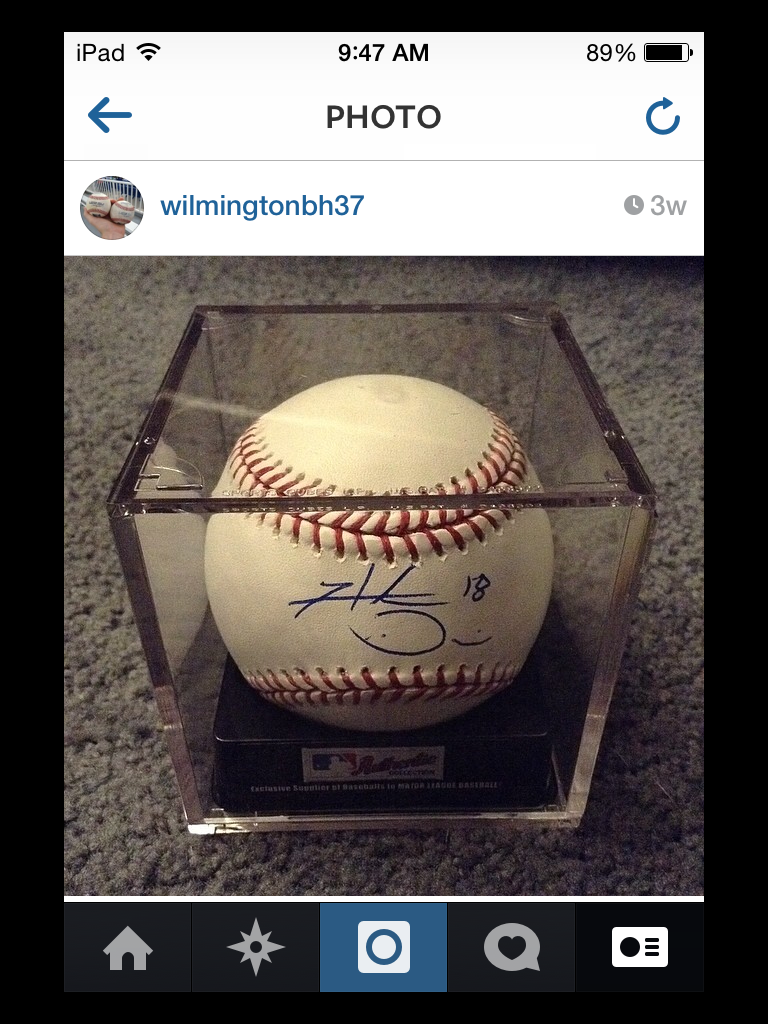 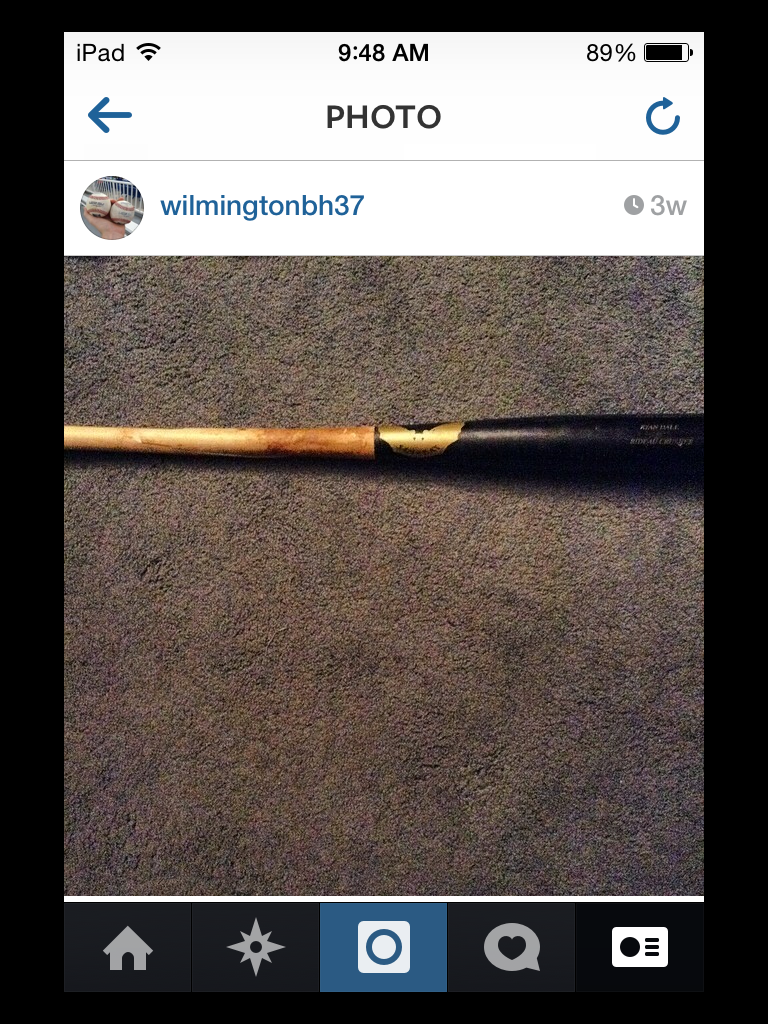 I am planning on going to the Blue Rocks game on the 4th. If any of you are going let me know!

I took all of these pictures the day before the actual game. I hope you enjoy them! 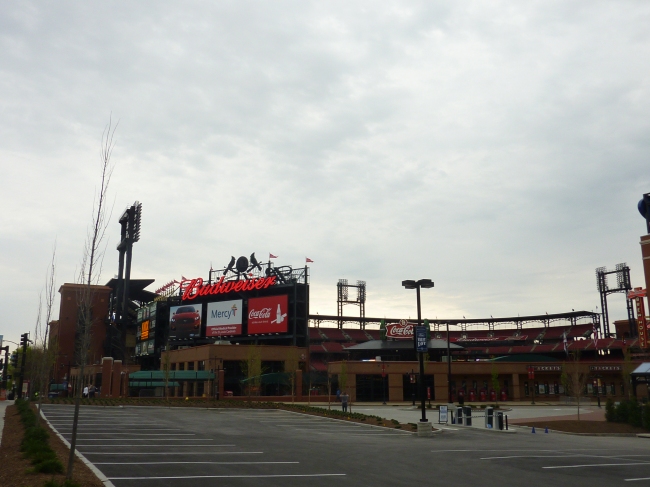 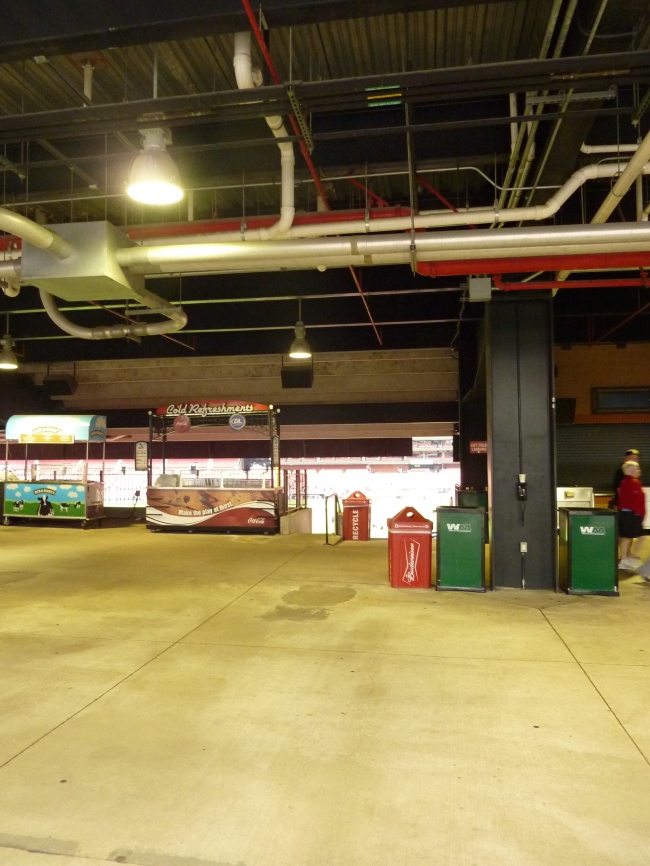 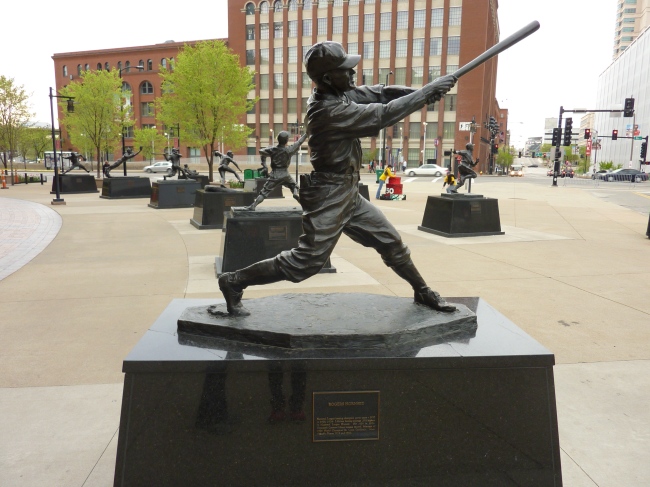 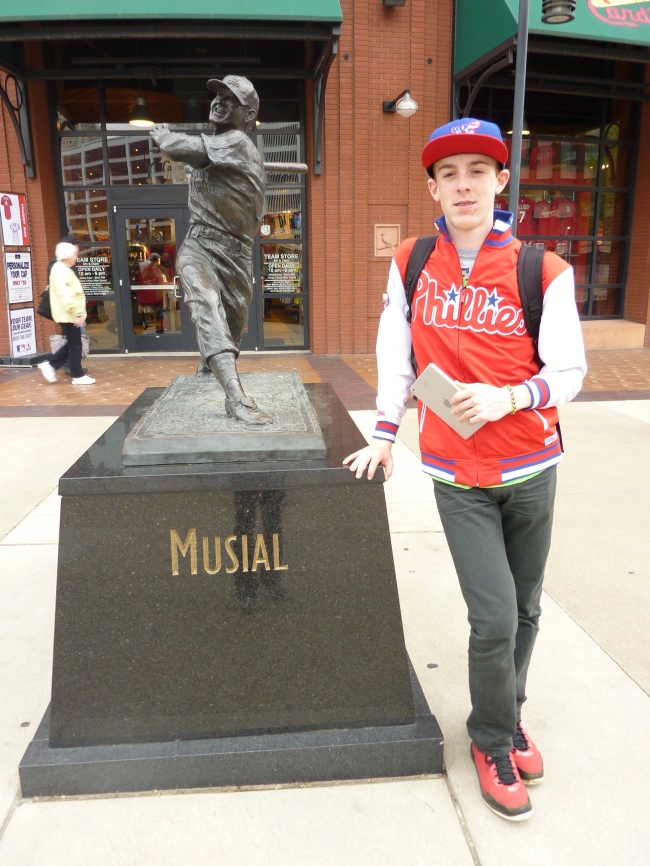 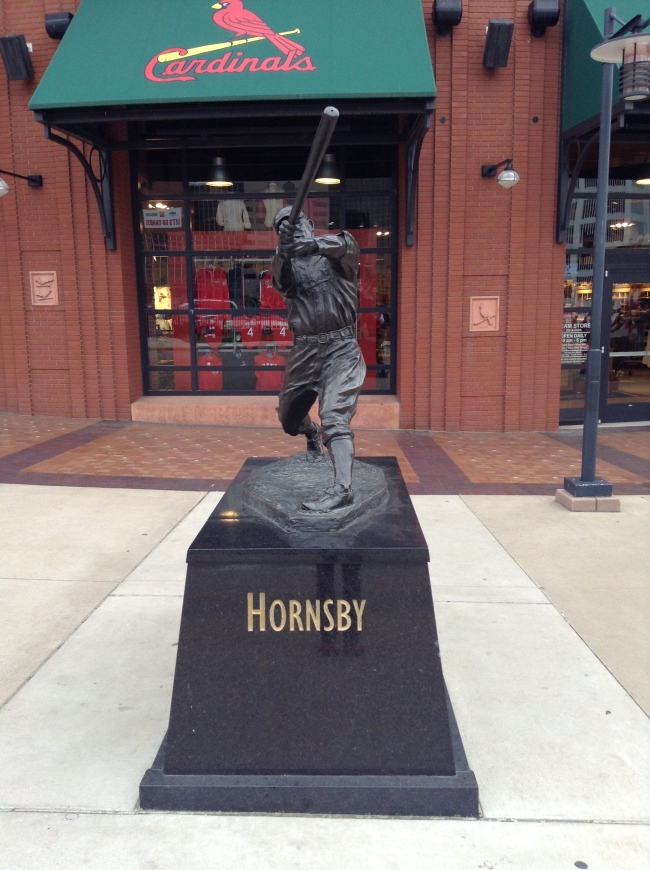 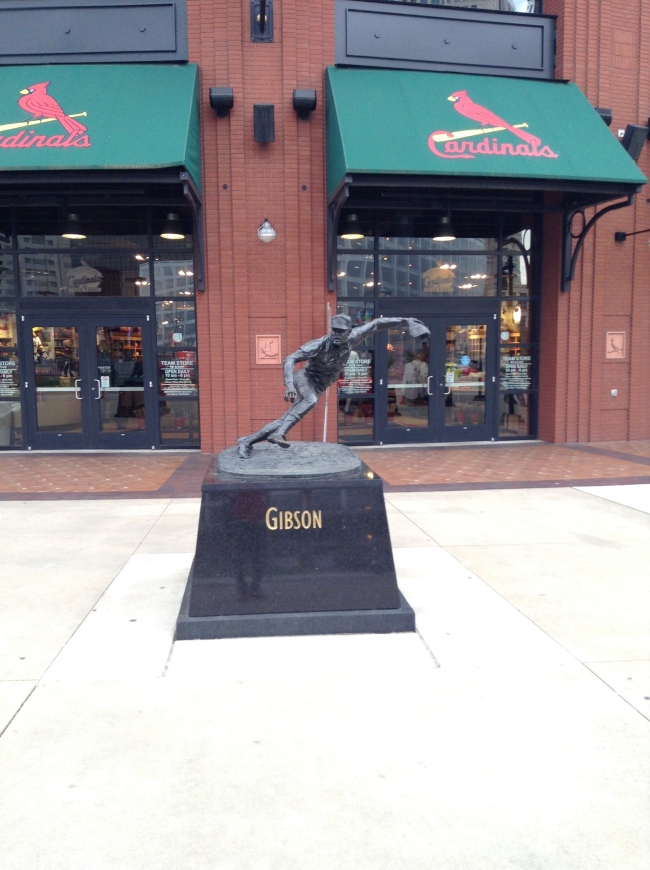 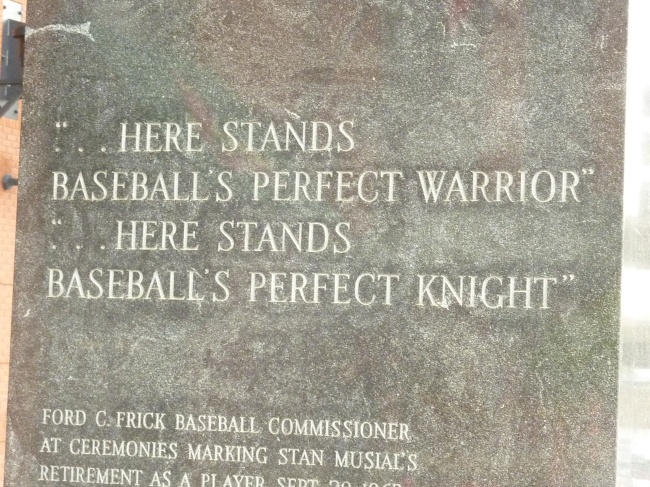 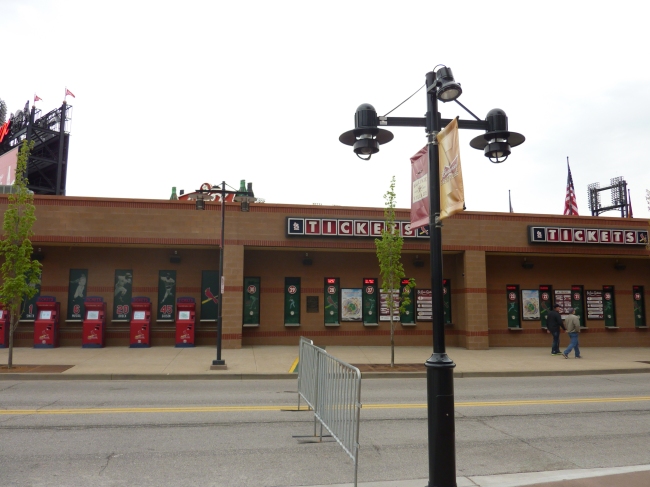 This is a post I have been meaning to do for a while now, however, I have been super busy with school. Since school is finish I will be catching up on the blog so expect so more blog entries in the next couple of weeks. Thank you for your patience and I hope you guys are having a wonderful summer.

As you may or may not know I was in St. Louis for the FTC World Robotics Championships. My team and I were honored to be there and we had a wonderful time. The game started at 7:15, however, the robotics portion of the day did not end until 5. After the day ended I promptly left the Edward Jones Dome, this is where the World Championship was hosted, and walked about 1.5 miles to the Busch Stadium. The Cardinals had already finished batting practice when I arrived so by the time I got into position it was Pirates batting practice. I spent all of my time during batting practice in the left field aisles hoping for either a tossup or a home run. A few home runs left the park but not many. Here is a picture, courtesy of Seat Hound, of where I spent my time during batting practice.

As I was waiting for a home run or a tossup a Pirates batter smoked ball right to Francisco Liriano, who was patrolling the outfield. I promptly called out, “Francisco!”, Liriano turned around at the sound of his name and quickly tossed me ball #1 of the day. Before, I could even put ball #1 in my backpack, another Pirates batter smacked a ball hard into left field. Jose Tabata jogged over to pick up the ball and without warning tossed the ball over his head directly to me for ball #2. Satisfied with my two baseballs, I began to make my way up to my seat. The Cardinals ended up winning the game 1-0 thanks to great pitching and a RBI double from Matt Holliday. Overall, it was a great day and I will remember it fondly and I cannot wait to return to St. Louis someday. 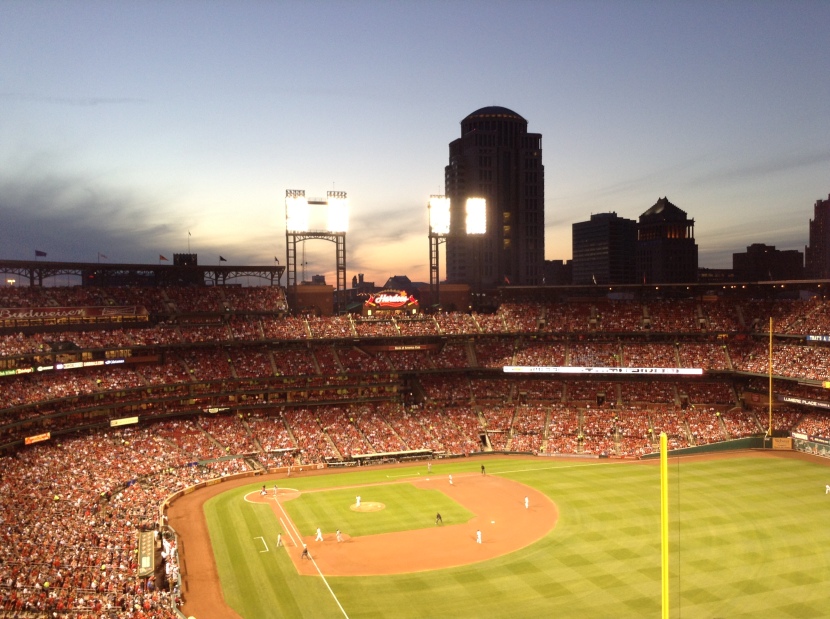 I have been busy so I haven’t had time to blog about my experience on the show, Edward Jones Chatting Cage. So since I had some free time to blog I decided to blog about the experience. To give you some background information the Edward Jones Chatting Cage is an online, video chat that MLB.com hosts where fans can talk and ask questions of players/managers/and other baseball people. I personally have been on the show twice interviewing Evan Gattis and Bud Black. My most recent appearance was with the manager of the Padres, Bud Black. I was able to ask Bud about his thoughts on the new replay system and he offered a very good response. Please click here to see the full episode of the Bud Black interview. Thank you for reading and have a wonderful Easter! 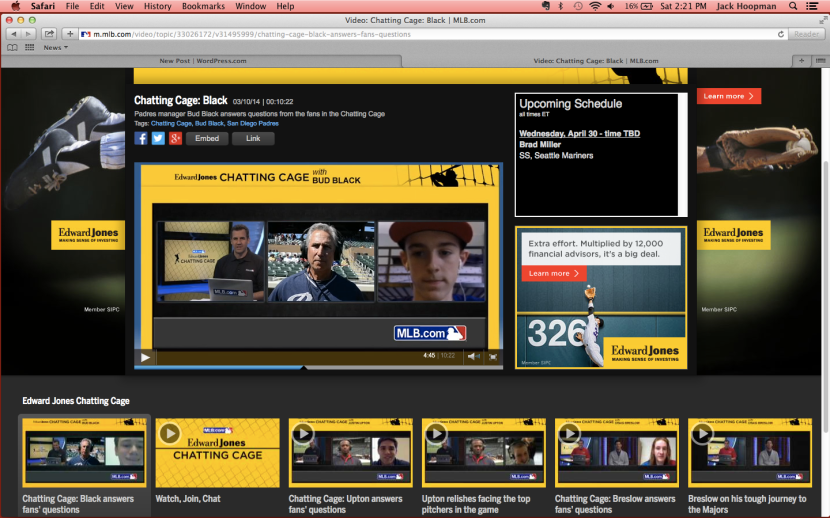 I just wanted to update everybody on my plans for April. I will be heading down to St. Louis, Missouri for the FTC robotics World Championship. While I am there for the weekend my team will be attending the Cardinals and Pirates game. I doubt I will have time to ballhawk or explore the stadium however I will take many pictures during the game so be sure to keep an eye out for pictures on my instagram page (wilmingtonBH37) and blog. Thanks so much for reading and I hope you guys are having a wonderful baseball season!

Before we know it the 2014 MLB and MiLB season will begin. It is an exciting day for all baseball fans when the another season rolls around. I personally can’t wait for the season to start and I am looking forward to all the baseball games and baseball events that I will be participating in this upcoming season. One of the main event/games I am looking forward to is the California League/Carolina League All-Star Game that will be hosted at Frawley Stadium this upcoming summer on June 16th.

Recently the Wilmington Blue Rocks announced that part of the All-Star festivities will include the first ever Minor League Home Run Derby with the field being swapped meaning the batters will bat from centerfield hitting towards the stands and toward the normal location of home plate. To explain this I included the photo below. 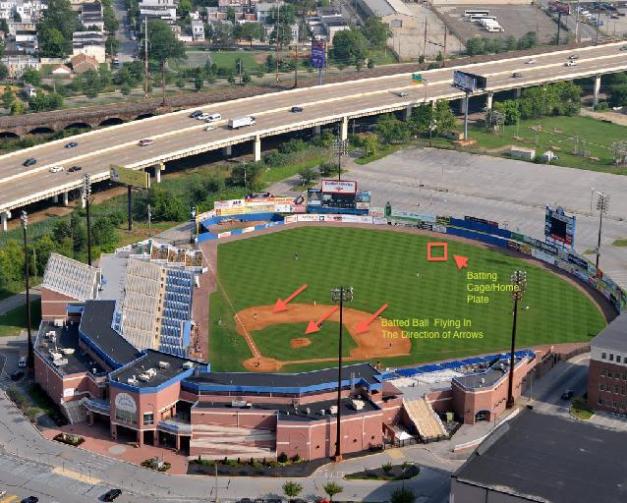 I am very excited about how this will operate and I can’t wait to be shagging the home run balls that will be flying into the stands in this years California League/Carolina League All-Star Home Run Derby. Thanks for reading guys!

Hi guys, I apologize for the delayed post but between school and the christmas season I have been too busy to post anything. Today’s update is going to be about some of the Phillies offseason moves with grades and some thoughts for each one.

Hi Everybody, for this weeks blog post I decided to compile a list of all the things I bring to the stadium when I go to a baseball game. If you guys have any ideas for things I might want to bring that I don’t have on my list please comment below. Also, what do you bring to games? Please comment below to answer that question or you can write a bog post in response. Thanks for reading guys!

Hi Everybody- First of all I want to thank you guys, my parents, and friends for supporting me this season. This year I had a ton of fun ballhawking at minor league stadiums and enjoying the game we all love, baseball. This season I snagged 17 balls in 5 games meaning I averaged 3.40 balls per game. I also got over 30 autographs and was able to interact with many players over the course of this season. I enjoyed the friendly competition of ballhawking with my cousin Connor and other people over the course of the season and reading about many of your interesting games you attended. So thank you very much.

I’ve been thinking about what to do with this blog in the offseason. I would like to post once every two weeks. I will post articles about free agents news and signings, previews or major league and minor league teams, hopefully a player interview or two, and the  baseball books I am reading.Thanks so much guys, I can’t wait for next season.

The Life Of A Wilmington Ballhawk
Create a free website or blog at WordPress.com.